We, the class 7C had a great class trip from the second of September to the third of September. On the first of September at 7pm , we brought our tents and our sleeping bags to the “Bootshaus” in Höxter, because a few parents didn’t had time to bring the things early in the morning. On the next day, the whole class, Misses Elsner and Mister Coskun met at the “Bootshaus” and built (with some help of the parents) up our tents. It wasn’t that easy, no, it was very confusing and complicated. After we were finally ready, we were thirsty and drank some tea. Then we went to the sports ground and played games, like frisbee or football. Our teachers brought some team games with them. At 3 pm, we went to the restaurant Salsa, where we ate some pizza, doner kebab and schnitzel, which tasted very yummy. Misses Hartmann joined our lunch. With a full stomach we went back to the campsite. When we were back, some of our class searched for big stones, because they wanted to paint them colorful. The rest of the class went kayaking. We had teams of two, who each took care of one kayak. Each one from the group drove in a larger group, which one after the other drove down the Weser. Some people of the first group swam in the Weser, because it was very hot which was really cold on that day. The algae’s annoyed us a bit but we ignored them. When the other group came back, we slipped down a boat slide. It was a lot of fun and we were getting wet, because some of us fell in the water. After that we cleaned the dirty kayaks and ourselves, because we were dirty too. Together we had a big, yummy Barbeque. The Teachers lighted a bonfire and we roasted Marshmallows and stick bread. Some of us played with games, which our teachers brought with them, while the others relaxed at the bonfire. Later Mr. Coskun went away. In the evening, at 10 pm we went in our tents to sleep because we were tired.

On the next day we woke up at 7am and it was way too early and we all were tired. Without any motivation, because we were tired, we made morning sport with Misses Hartmann and Misses Elsner. While making breakfast, we cleaned up the campsite and it looked way better than it did before. Then it gave breakfast and it was too much food! We ate as much as we could but it was still too much. After that huge breakfast we went to the outdoor pool, where Misses Hartmann gave us pink masks. There weren’t many people, so we had the pool nearly just for us! The sun appeared and we jumped with much fun down the 5 meters high dorm and slipped with a smile on our faces down the slide. After that we went back and dismantled our tents, which was way easier than building them up. When our parents picked us up, they were happy and glad to see us. Our teachers sold our food because it was still something left.

Then we left the camping site with a big smile on our faces, because it was the best class trip ever. 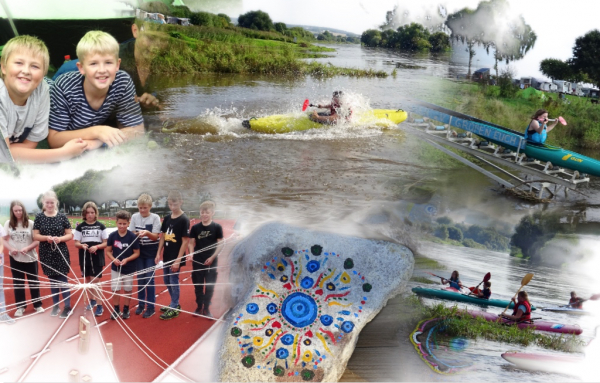